SA collar tabs. Worn on  the stormtroopers brown shirts collar tabs, for ordinary ranks. White thread on black for Berlin Gau.  The  first colour insignia  was introduced in 1927  when  colored  collar patches  were issued.  The  right  tab  showed  the  wearers  service  unit  and  the left  his  rank. The  colour  identified  the  wearers   SA  distinct. 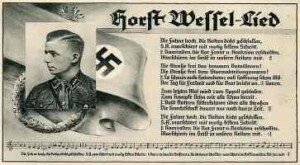 Be the first to review “SA collar tabs”