The Waffen SS Peadot  camouflage  drill uniforms were introduced in 1944. A two  piece uniform  that was issued  to replace  the  M42  smock.  All other  camouflage  was to be  discontinued  according  to  directive 99.  The uniform  was made from a heavy  herring bone twill  and  single  sided. But a less  common version  was made from cotton.  The  field  tunic  was  M43  style  with  four  straight pockets and five  metal pebbled  buttons .  The inside  was  a  rough  white  colour with  a partial  rayon ( artificial silk) liner.  Belt  suspenders  were  also included.  The only insignia permitted  was  a  grey SS sleeve  eagle. But many period photos  show  officers   with  shoulder boards  and runic SS collar  tabs attached.

The   field  trousers  were mostly the Keilhose  design. Tapered  legs ans  white  cotton  foot  stirrups. The  waist included  two  waist  adjusters  and  a button pocket  to the  reverse. Also a  small watch pocket  to the  front.Belt  loops  with buttons  were standard. 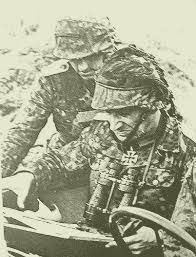 Waffen SS HBT Dot Panzer Wrap. was   basically the M36 panzer  pattern so a double breasted jacket of HBT denim fabric. The  fall collar  unlike  the panzer version had no piping but  the  shoulder boards we  believe  would  have had  a variety  of  colours, pink, red  and golden yellow  waffenfarbe . This later M36   pattern  enabled  the  wrap  to be button  up  and closed  at the top via a metal eyelet. The  cut  was    the  same  as  the  SS black  panzer  wrap   rounded  collar  and  a vertical  front opening  buttons  were mostly  black plastic

Collar  insignia although not  period was  occasionally used.  Runes  collar  tabs,  either  thread or  BeVo  versions.. The national  emblem(  eagle  and  swastika)  was  stitched  to the right  breast. This  was  the  woven or  BeVo variety. Black  wool SS shoulder boards (Schulterklappen)  complete the  jacket.